First Flight-Gliding in the Land of Enchantment

Well loyal readers, it has been quite a long time since I last posted (for which I apologize), but I have been rather busy. I also apologize for the fact that this is not going to be the second part in the Good Movie series, but I think you will find this post far more interesting and enjoyable than it would have been.

I write this post from the middle of nowhere in the Guadalupe Mountains of New Mexico. I would tell you where we are, but it wouldn't mean much to you. The nearest town is a long ways away and several thousand feet below us. On to the main point of the post!

This morning we drove to an old abandoned airfield in Hobbs, NM that used to be the training site for B-17 bombers during the Second World War. At the time, it was the largest airfield in the USA and its runway still ranks among the longest in the country. The glider was a Schweitzer 233 made by a German American company in New York back in the 1960s. The particular glider we flew was made in ’65. The hangar was built on the concrete surface used to calibrate the compasses on the bombers during the war. It was very neat to be flying on the airfield used during the war.

Anyway, first-off we did a formal check of the plane (There’s not much to check on this type of glider so we basically made sure the wings were attached) and then pulled the glider out of the hangar and out across what used to be the ramp for the B-17s. Here is a picture of the airfield during 1943 and you can actually see the bombers lined up on the ramp. (Despite the word, it is not inclined at all, it is just the place where the bombers were pulled out and inspected before flight.) You can also see the barracks that housed the cadets, technicians and trainers. 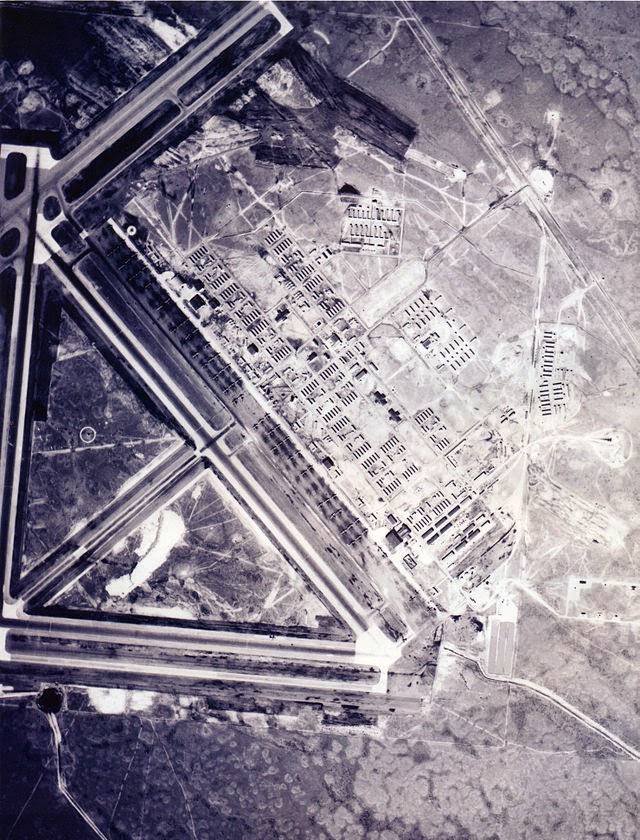 To make a long story short, we pulled the glider out to the end of the runway behind a pick-up and took a few pictures while the pickup went down the runway about half a mile. I got strapped into the glider and we did a check for full movement of the controls and radio signal. The pilot, my step-grandfather, was in the back and I was in the front. 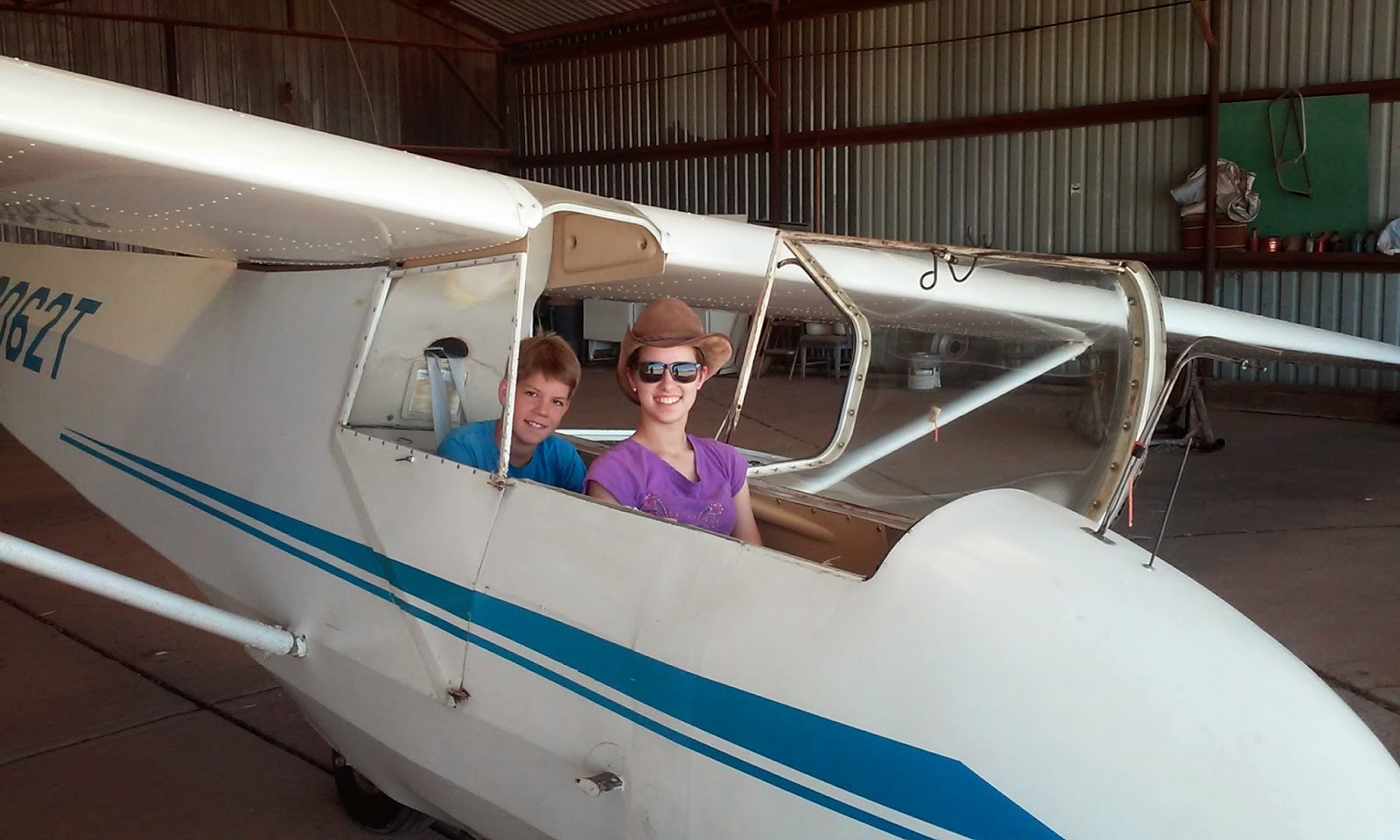 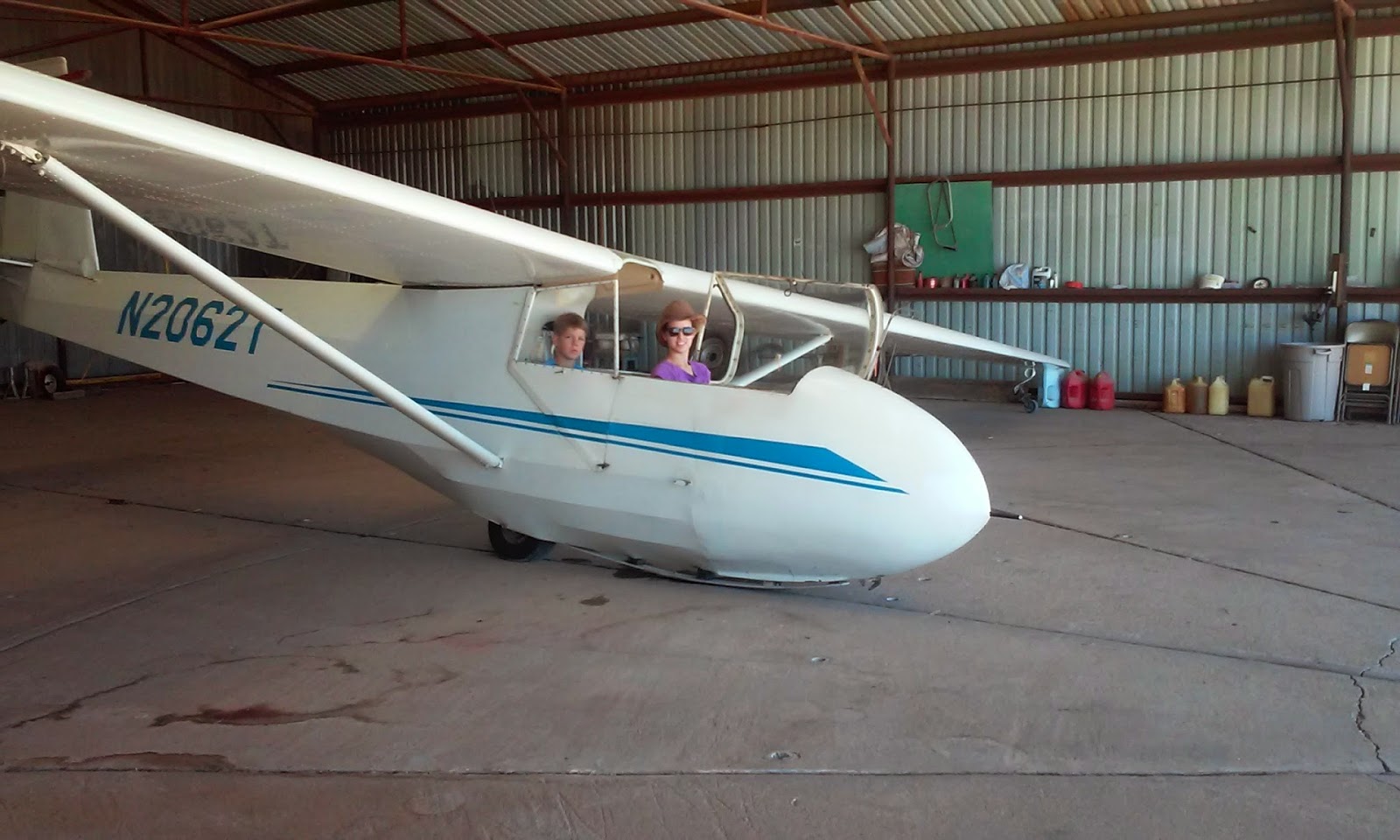 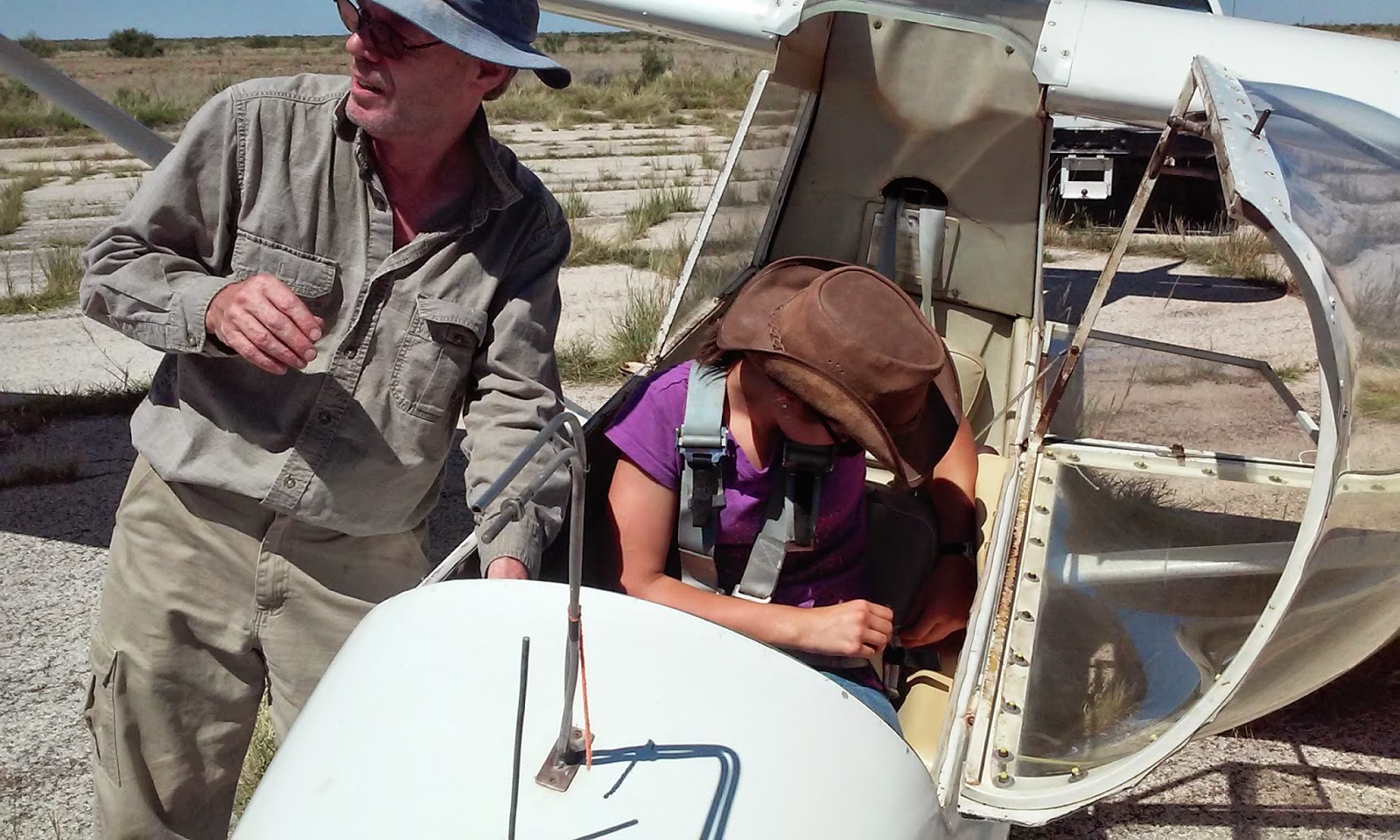 To take-off, the pickup would go to the end of the 1/2 mile wire, attach it to the hitch and then radio back, "Tow truck ready to take up slack." If we were strapped in and the canopy was secured, we would then reply, "Glider ready to take up slack." The tow crew would then say, "Taking up slack." Once the slack was out, we would radio, "Slack out. Pause." This told the tow crew to wait as we radioed Hobbs Regional Airfield and warned them that a glider was being launched. Then we would say "Let's go" to the tow crew and we'd be off. The pickup would begin to cruise along at around 15 mph picking up pace very quickly to about 55 mph, at which point the glider picks up off the ground, takes a steep 45 degree angle into the air for about twenty seconds, levels out and then releases the cable from the front of the plane so that it is free of the truck. The wire, which is about a half mile long and has a piece of chain on one end, is slowed down in it's descent by a parachute which the tow crew picks up. I don't have pictures of that, but here's take-off. 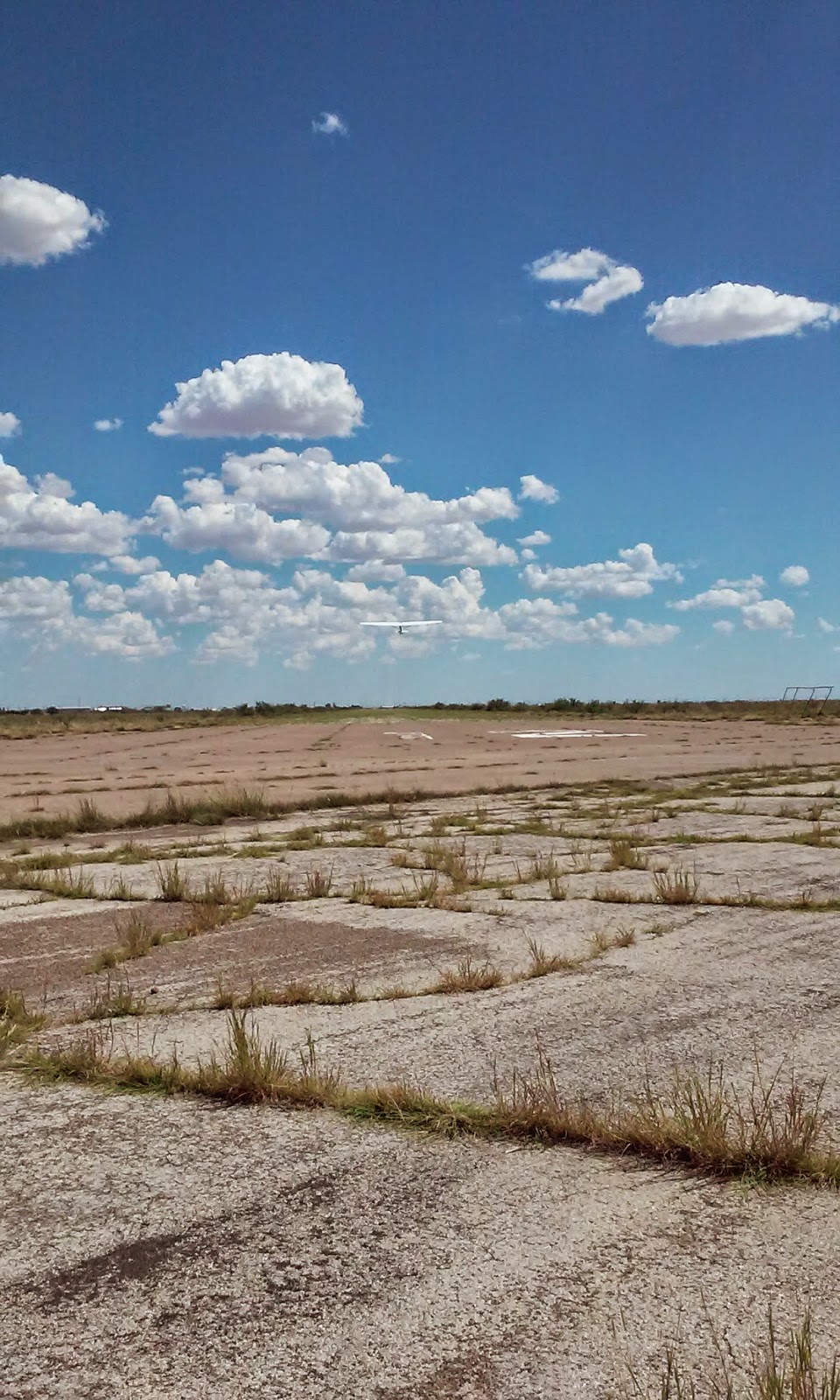 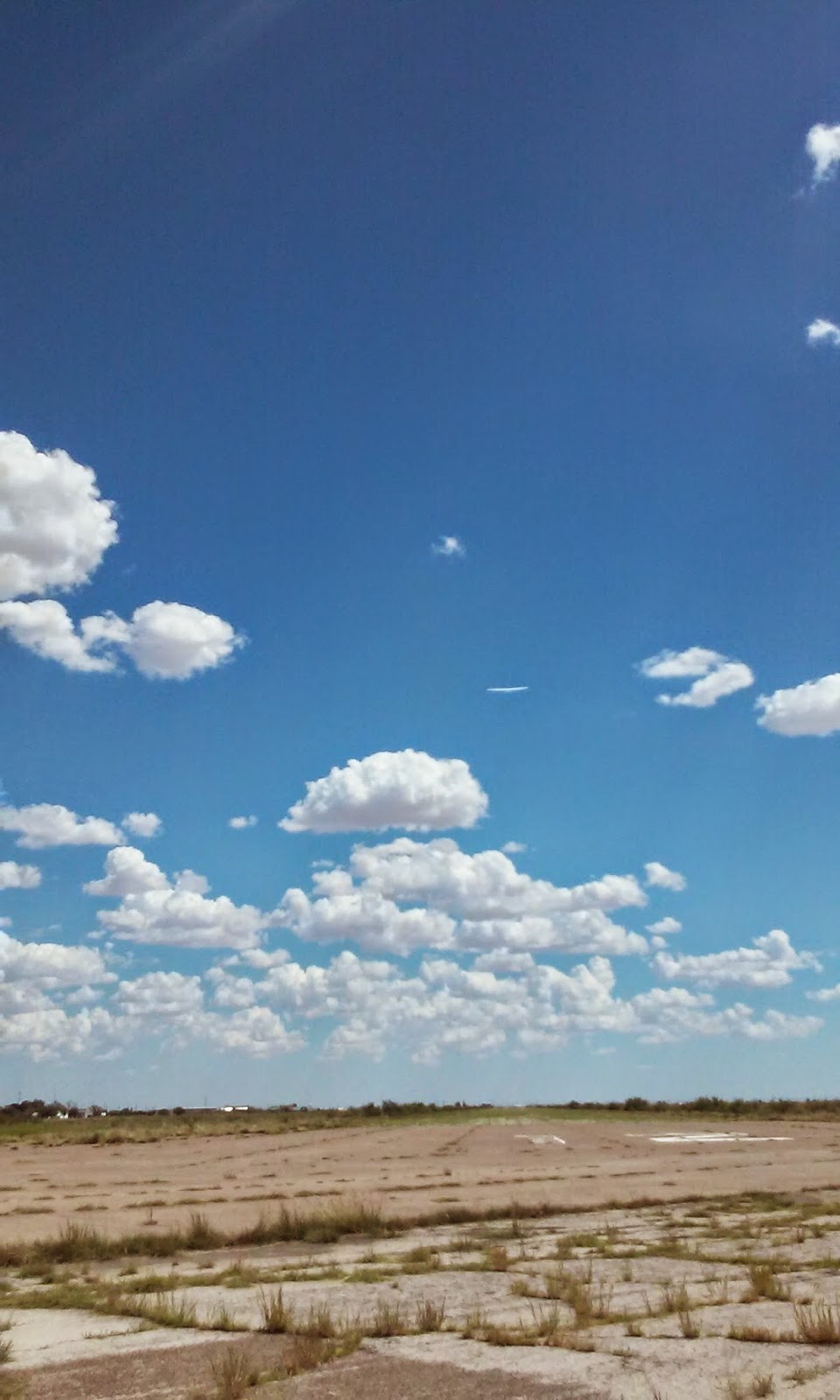 As you can see, the airfield is grown up but it still works for gliding. You can just barely distinguish the plane in the picture above, but it is the horizontal white strip in the center between all the clouds. It is nearly at 'top of the flight' which is when we release the cable. Normally, the glider would be towed up by a powered plane, but there was no such convenience that day. :)

For my first two flights, we just flew around the airfield in a circuit and then landed again just so I could get accustomed to the feeling. I flew for a majority of the time and that was fairly simple. There are three main controls: the stick you steer with, the rudder pedals, and the air brakes. The rudder pedals were handled by the pilot and the brakes aren't necessary until landing so I didn't use those. Most of the flying is done with the stick. My step-grandfather did the take-off and landing but I flew the rest. I banked over a bit too much one time and scared the pilot, but we straightened out again so other than that I did fine. :D

After those flights, my brother went up and we ate some lunch as we waited for the clouds to build. Clouds are an indication of a thermal wind current which is what the glider uses to climb since it has no engine. Without a thermal, flights are restricted to about ten minutes because they don't have enough air speed from the tow to stay in the air for very long. Flights can be up to around 7 hours however with a good thermal. They are hard to find and fairly hard to stay in but once you do, it is quite nice.

I went up a third time looking for a thermal but we had to come back down and try again. On this fourth time, we found one and began circling around inside the thermal until we were up to about 7,000 feet above the airfield. (10,700) feet above sea level. This took about twenty minutes because we had to battle the wind currents and find the right one to take us up. I flew several of these turns myself, which was a little bit scary but surprisingly simple. I started getting a little bit sick up towards 8,000 feet so we started down. In order to descend fast enough, my step-grandfather opened the air brakes, which forces us down against the wind current. Generally we would go down much slower. The fast descent increased the pressure I was half-deaf upon landing, but it went away after a little while.

Well this post is getting a bit long. I haven't had time to explain everything and I don't want to bore you, but I might be able to answer some questions you may have. I have been considering an aviation career for some time now so today was a great chance to get a bit of experience. I have a powered flight scheduled for later on this week so may make a post on how that goes as well. So long!
Posted at 9:24:00 PM