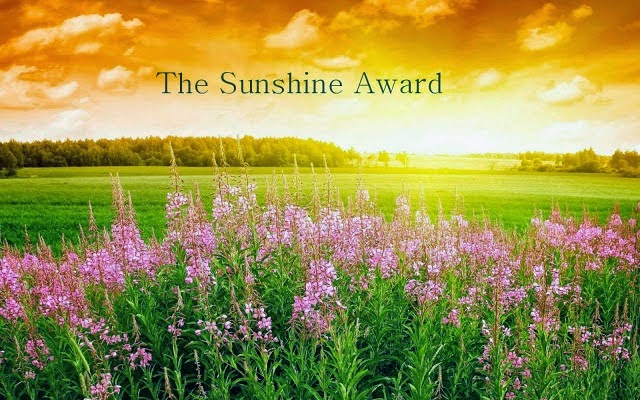 Well, I was going to write the second part to my Good Movie series here, but I was nominated for the Sunshine Award by Isaac Benjamin so here I am with this post instead. Thank-you Isaac! After all, A Good Movie Part 2 can wait. :)

The questions I was given and my answers to the same are as follows.

1. If you could go anywhere, where would you travel?

Does this question limit me to one place??? That's not very nice. :) Well, lately I have really been wanting to visit Normandy, France. I would love to walk the beaches made so famous by the Allied troops during the week of June 6th, 1944 and to see the numerous cemeteries honoring the fallen Allied and German soldiers who fell there. Plus, it would be a great opportunity to do some on-site research for my WWII book. There are many other places I would like to visit too, like Scotland and Rome.

A. That all depends on where I'm living. J

3. Would you mind if there was less gravity on Earth?

I don't think I would mind. I've never experienced a planet with less gravity though, so I could never be sure. I imagine that it would take some getting used to.

4. What is your favorite movie genre, (Kind of movie)?

That is a tough question. I really like Lord of the Rings and Narnia, but I watch very little fantasy other than that. I have seen many amazing and meaningful war movies, but that’s not really my genre either. Action is a pretty wide genre to state as a favorite, but that's probably the one that fits my interest best.

5. Who is your favorite author-director-artist?

I think I'll probably go ahead and answer two of those. As my readers are probably aware, Lord of the Rings is my favorite book(s) but I can't say that J.R.R Tolkien is my favorite author. Based entirely on the author, I think that Rafael Sabatini, and G.A Henty are probably my favorite. There are good authors, but I don’t really have a particular one that I love more than any other. C.S Lewis and Chesterton are really good too though. As you can probably see, that question is a bit difficult.

My favorite director is Steven Spielberg. He has done some movies I don’t like, but he has produced many good ones. I don’t really keep up on directors that much so I don’t have wide knowledge in that area. I must say that I like Peter Jackson too, for his admirable efforts with Tolkien’s books.

That’s easy. Lord of the Rings. But I have also enjoyed the Anne of Green Gables Series, The Tripods, Narnia and the Black Stallion series when I was younger.

7. If you could have had any other name, what would it be?

A. Well, not to avoid or be a stick-in-the-mud, but I really like the name I have and I wouldn’t trade it for any other.

That’s all of them I think. The people I nominate are as follows:

My questions for my readers:

1. If you could pick anywhere to live, where would it be?
2. If you could meet any author, who would it be?
3. What type of music do you like?
4. Best line from the Princess Bride?
5. How much quoting do you do every day?
6. Do you play any instruments? If so, what?
7. What is your favorite season of the year?
8. What is one of your biggest dreams in life? (i.e. skydiving, be a pilot, win the Kentucky Derby, etc. J)
9. What is your absolute favorite thing to do?
10. If you could be anywhere right now, where would it be?
11. Have you ever wanted to just get lost somewhere for a week or two?
12. Does a cat look like potential food to you? (I have a sense of humor, ok?)
13. If you could have had any other name, what would it be? '
Okay, I know this is a common question to ask, but I'm going to ask it anyway.
14. What is you favorite color?
15. What would be your dream career?
Posted at 5:44:00 PM