These Are the Times

Here is a picture I took and edited a few days ago that I thought I'd post here. The quote, one of my favorites, is from Thomas Paine, (1737-1809) a journalist hero of 1776 who wrote a collection of works which aided in refuting Loyalist view, stirring up the people and calling them to arms against Great Britain during the Revolutionary War. This particular quote is the opening paragraph of one of the pamphlets he wrote called, The American Crises Papers  Other works by T. Paine include Common Sense, (his most well known work) Agrarian Justice, The Age of Reason, and the Rights of Man which was a work defending the liberties of the French people in 1789 and 1790 against Edmund Burke and the one I am reading right now. Thomas Paine was a fiery debater and journalist whose spirit and sarcastic style did not win him favor amongst the rhetoric arguers during that time period but was not necessarily condemnable by them when it brought them to a swift and crushing defeat in their arguments with him. (To better see the quote, click on it to magnify) 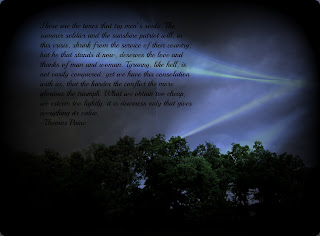 Text of the quote:

These are the times that try men’s souls. The summer soldier and the sunshine patriot will, in this crisis, shrink from the service of their country; but he that stands it now, deserves the love and thanks of man and woman. Tyranny, like hell, is not easily conquered; yet we have this consolation with us, that the harder the conflict the more glorious the triumph. What we obtain too cheap, we esteem too lightly: it is dearness only that gives everything its value.
Thomas Paine
Posted at 4:51:00 PM