I recently read the poem, Mont Blanc, by Percy Shelley and decided I would post some portions of it here, along with a few pictures of the mountain. Mt. Blanc is the 11th tallest mountain in topographic prominence and is the highest mountain in the Alps and the European Union at 15,782 ft. Located on the border of France and Italy, it is called Mont Blanc by the French and Mt. Bianco by the Italians and its ownership has been disputed since the Napoleonic Wars, when the Duchy of Savoy, which it was located in at that time, was ceded to Napoleon. The current situation sees administration of the mountain being shared between the Italian town of Courmayeur and the French town of St Gervais les Bains, according to Wikipedia, that is. Here are some pictures: 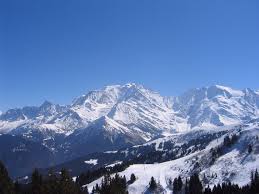 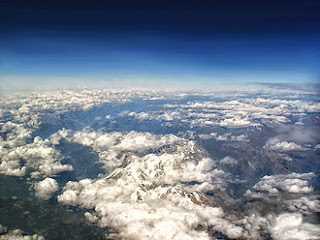 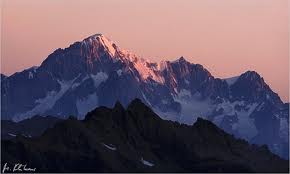 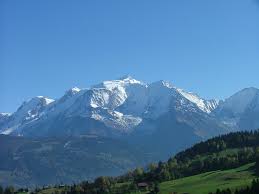 And here are a few selected portions Shelley's poem on it. (Shelley was an English poet during the 19th century.)

Mont Blanc yet gleams on high:--the power is there,
The still and solemn power of many sights,
And many sounds, and much of life and death.
In the calm darkness of the moonless nights,
In the lone glare of day, the snows descend
Upon that Mountain; none beholds them there,
Nor when the flakes burn in the sinking sun,
Or the star-beams dart through them. Winds contend
Silently there, and heap the snow with breath
Rapid and strong, but silently! Its home
The voiceless lightning in these solitudes
Keeps innocently, and like vapour broods
Over the snow. The secret Strength of things
Which governs thought, and to the infinite dome
Of Heaven is as a law, inhabits thee!
And what were thou, and earth, and stars, and sea,
If to the human mind's imaginings
Silence and solitude were vacancy?

Mont Blanc appears--still, snowy, and serene;
Its subject mountains their unearthly forms
Pile around it, ice and rock; broad vales between
Of frozen floods, unfathomable deeps,
Blue as the overhanging heaven, that spread
And wind among the accumulated steeps;
A desert peopled by the storms alone,
Save when the eagle brings some hunter's bone,
And the wolf tracks her there--how hideously
Its shapes are heap'd around! rude, bare, and high,
Ghastly, and scarr'd, and riven.--Is this the scene
Where the old Earthquake-daemon taught her young
Ruin? Were these their toys? or did a sea
Of fire envelop once this silent snow?
None can reply--all seems eternal now.
The wilderness has a mysterious tongueWhich teaches awful doubt, or faith so mild,
So solemn, so serene, that man may be,
But for such faith, with Nature reconcil'd;
Thou hast a voice, great Mountain, to repeal
Large codes of fraud and woe; not understood
By all, but which the wise, and great, and good
Interpret, or make felt, or deeply feel.

The everlasting universe of things
Flows through the mind, and rolls its rapid waves,
Now dark--now glittering--now reflecting gloom--
Now lending splendour, where from secret springs
The source of human thought its tribute brings
Of waters--with a sound but half its own,
Such as a feeble brook will oft assume,
In the wild woods, among the mountains lone,
Where waterfalls around it leap for ever,
Where woods and winds contend, and a vast river
Over its rocks ceaselessly bursts and raves.
Thus thou, Ravine of Arve--dark, deep Ravine--
Thou many-colour'd, many-voiced vale,
Over whose pines, and crags, and caverns sail
Fast cloud-shadows and sunbeams: awful scene,
Where Power in likeness of the Arve comes down
From the ice-gulfs that gird his secret throne,
Bursting through these dark mountains like the flame
Of lightning through the tempest;--thou dost lie,
Thy giant brood of pines around thee clinging,
Children of elder time, in whose devotion
The chainless winds still come and ever came
To drink their odours, and their mighty swinging
To hear--an old and solemn harmony;

Thine earthly rainbows stretch'd across the sweep
Of the aethereal waterfall, whose veil
Robes some unsculptur'd image; the strange sleep
Which when the voices of the desert fail
Wraps all in its own deep eternity;
Thy caverns echoing to the Arve's commotion,
A loud, lone sound no other sound can tame;
Thou art pervaded with that ceaseless motion,
Thou art the path of that unresting sound--
Dizzy Ravine! and when I gaze on thee
I seem as in a trance sublime and strange
To muse on my own separate fantasy,
My own, my human mind, which passively
Now renders and receives fast influencings,
Holding an unremitting interchange
With the clear universe of things around;
One legion of wild thoughts, whose wandering wings
Now float above thy darkness, and now rest
Where that or thou art no unbidden guest,
In the still cave of the witch Poesy,
Seeking among the shadows that pass by
Ghosts of all things that are, some shade of thee,
Some phantom, some faint image; till the breast
From which they fled recalls them, thou art there!