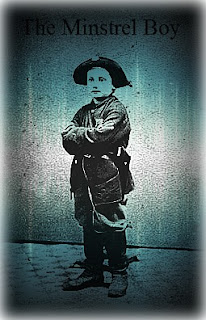 The above picture is a photograph taken of a child serving as a drummer boy in the American Civil War. It struck me enough to take the picture and edit it, applying the title 'The Minstrel Boy' from the Irish folksong written by Thomas Moore in the 1790s. The song became quite popular during the Civil War and gained even more widespread popularity after World War I. It is still played, often to the accompaniment of bagpipes, at the funerals of police/fire or military officers today. Because the picture's size would not permit me to also add the lyrics, I include them below.


The minstrel boy to the war is gone,
In the ranks of death you'll find him;
His father's sword he has girded on,
And his wild harp slung behind him;
"Land of Song!" said the warrior bard,
"Though all the world betrays thee,
One sword, at least, thy rights shall guard,
One faithful harp shall praise thee!"

The Minstrel fell! But the foeman's chain
Could not bring his proud soul under;
The harp he loved ne'er spoke again,
For he tore its chords asunder;
And said "No chains shall sully thee,
Thou soul of love and bravery!
Thy songs were made for the pure and free
They shall never sound in slavery!"


During the American Civil War a third verse was written by some unknown author, and is sometimes included in certain renditions of the song:


The Minstrel Boy will return we pray
When we hear the news we all will cheer it,
The minstrel boy will return one day,
Torn perhaps in body, not in spirit.
Then may he play on his harp in peace,
In a world such as heaven intended,
For all the bitterness of man must cease,
And ev'ry battle must be ended.